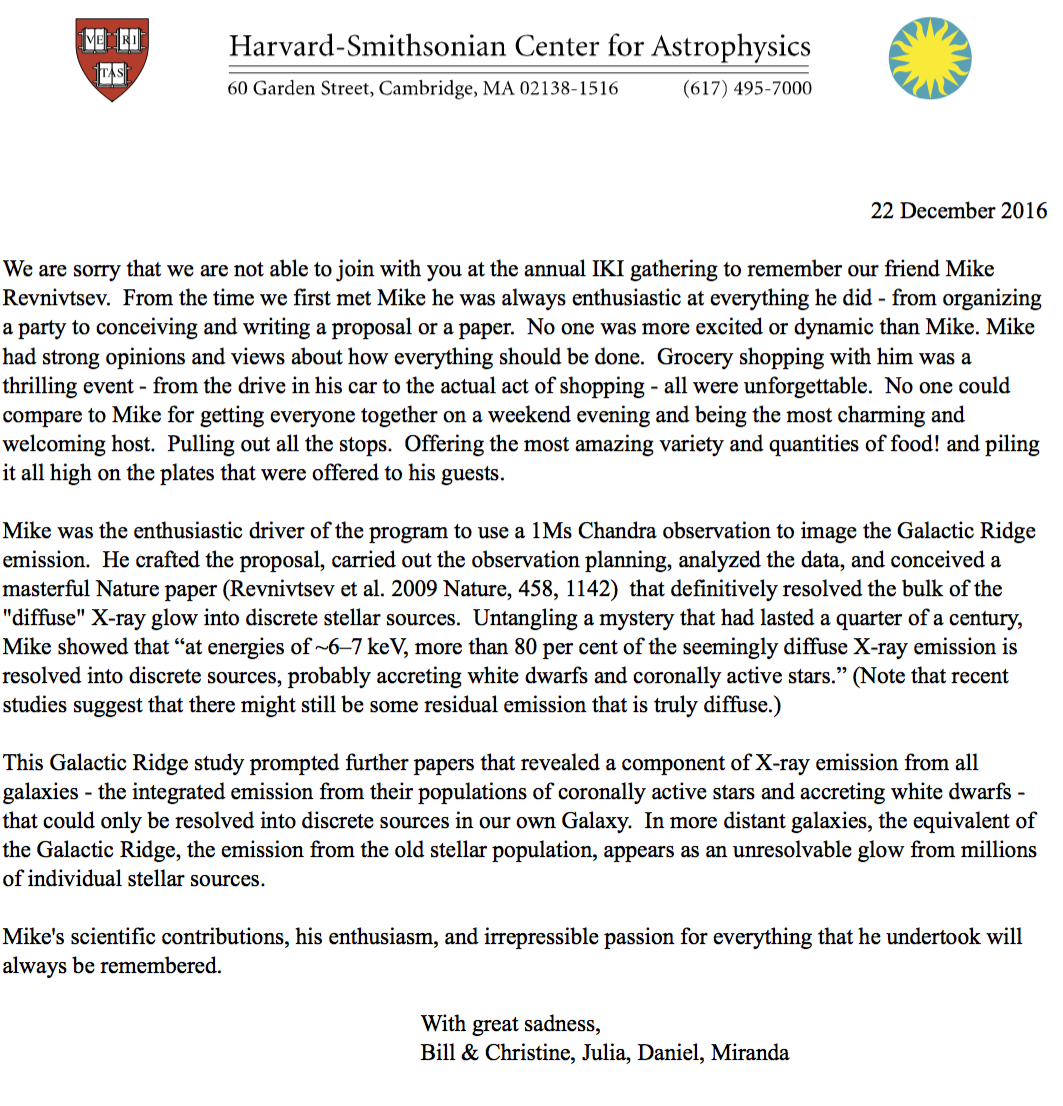 In memory of Mikhail Revnivtsev 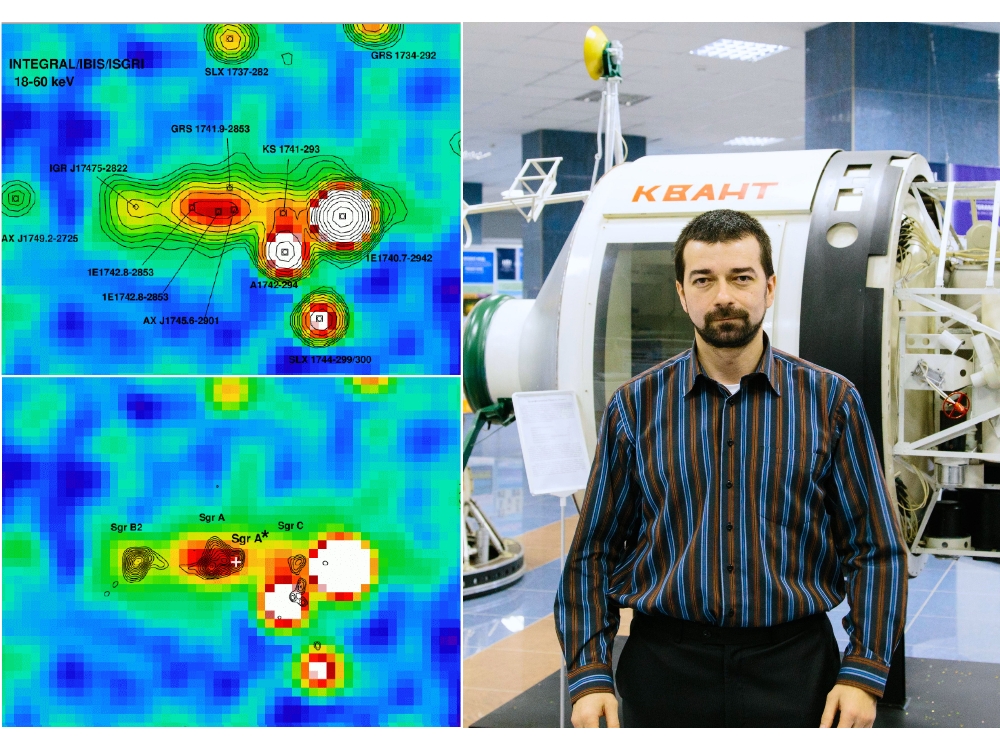 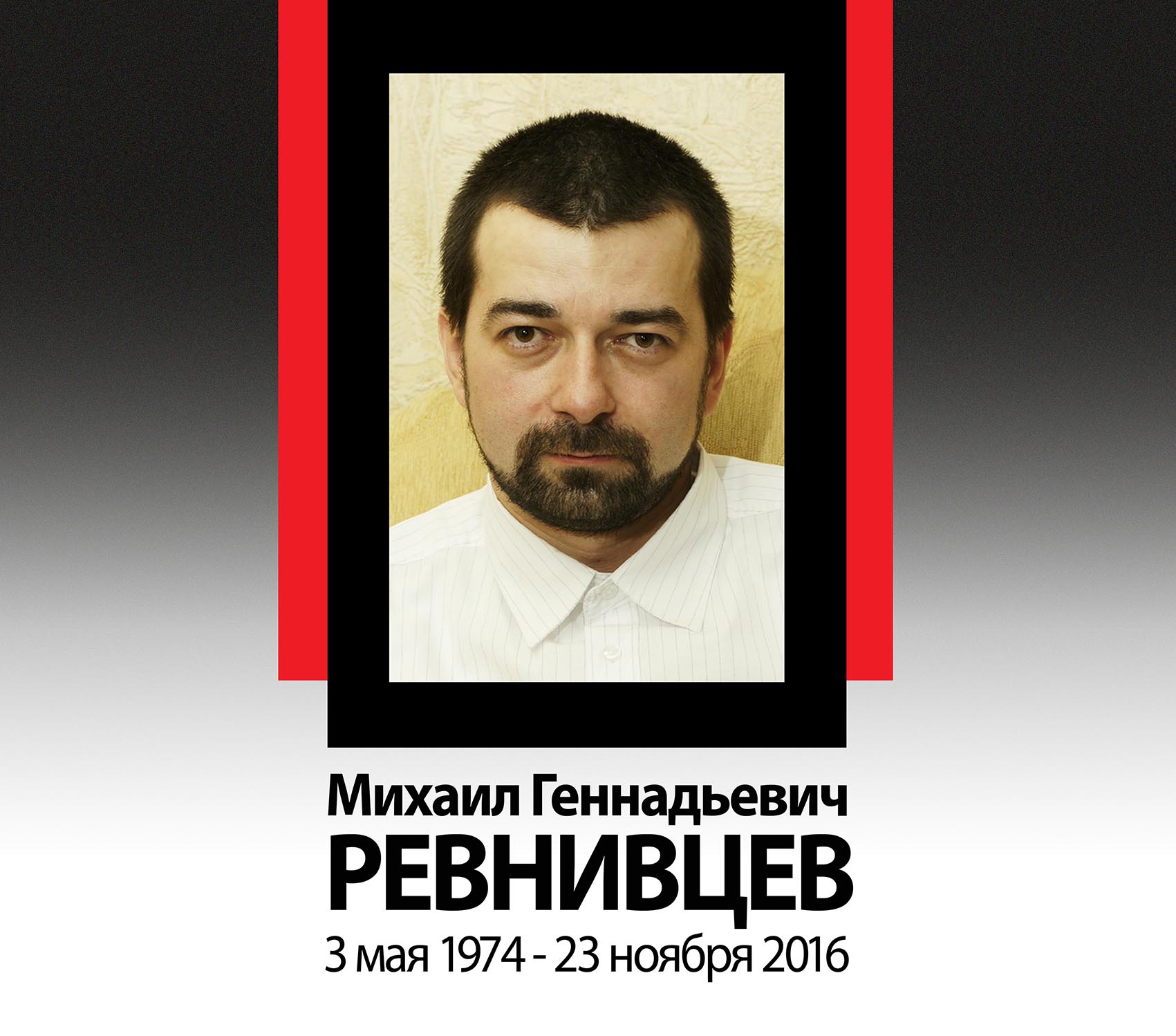 — We lost a great person. I will never forget the first time I met him in Taormina in 1998. Mike was young and promise scientist and our expectation were right. I big hug to his family.

— these are indeed very sad news. I have very fond memories of working with Mike at the ISDC in the early days of the INTEGRAL mission and of the many occasions to discuss with him and to enjoy life throughout the years.  Please send my deepest condolences to his family.

— These are very sad news indeed and a great loss both personally and professionally for our community. My thoughts go out to Mike’s family and friends and also hope our condolences can be passed on.

— This is indeed very bad news, a big loss professionally and humanly. Please bring our condolences to Mike’s family.

— I was shocked to learn of Misha Revnivtsev’s death. The world of astronomy has lost one of the foremost explorers of the x-ray sky, and those of us who knew him personally lost a great colleague, and a great friend. I  treasured my own conversations with Misha during the annual high-energy astrophysics meetings at IKI. Great encyclopedic knowledge, combined with deeply original thinking and powerful intuition. Always a new insight, always something to think about afterwards. I will remember his larger than life personality, his modesty, his kindness and empathy, his calm demeanor and his deep passion for science and for life. It is so sad that he is no longer with us. Please pass on my deepest condolences to Misha’s family.

— I heard about the tragic loss of Mikhail. I meant to send you, as ones of his closest colleagues, my condolences. Please transmit them to whoever you see appropriate. He was young, very bright and will be missed.

— this is indeed very sad news. I knew that Mike was sick, but I did not expect such a tragic event. Please express my condolences to the whole group at IKI and to Mike’s family. This is indeed a major loss also for our scientific community.

— this is a tragic news. This is a loss for the entire scientific community, beside being a horrible loss for the family and your institute.

We send our deepest condolences to Mike’s family. He has been a greatly estimated colleague, and his contribution to science has been enormous.

Enrico Bozzo (on behalf of the whole team)

Jens Chluba has just informed me about the terribly sad news from Mike Revnivtsev.  I had no idea about his sickness. <…> I thought everything would be fine with him by now.

I remember very well his very young family at MPA during the time he was a student, and how proud the High Energy group was of him at the time he was recognised by the Russian Government.  I also vividly remember his picture with Medvedev. He was active, happy, and strong at his work, and I admired him for how he was able to cope with work challenges and serious family problems.

These things are particularly hard to accommodate when they involve young people with such a great future perspective, and I guess it is even harder if you have supervised him during his early career years.

Please transmit my sincere condolences to his family and to the entire High Energy group at MPA, which I would like to make extensive to Sazonov and the other colleagues at IKI in Moskow.

— This is very sad news. Mike was a wonderful scientist and a great colleague, with which we worked  construvctively and always in good harmony for many years with INTEGRAL, in the TAC, in the IUG and in a variety of other capacities connected with our observatory. I  had not been aware that he was so gravely ill, and it is very sad to hear htat he has passed away.

Please forward my condolences to his wife and family.

— This is shocking and unexpected for us, not knowing about his illness. I am going to miss him as a good friend and excellent scientist. I always enjoyed interacting with him about our science, our political interests and personally.

My thoughts are with his wife, children and family.

— This is a great loss indeed for the Astrophysics community. Mike was a great scientist and a very pleasant person. My deepest condolences to his family.

— We are shocked and sad about this news. Mike was a wonderfully lively, inspiring, constructive, creative, and friend-like colleague in our INTEGRAL community, we also have fond memories especially from the the time while he had a fellowship at the Garching Universe cluster. Please convey to his family our condolences, as well as these extremely positive memories of Mike. Unbelievable.

Roland Diehl (with his friends in Garching)

— please, bring our condolences to the family and all Russian colleagues from the whole IBIS team.

I had the priviledge to work with Mike for some time at the beginning of  the survey and had a constructive exchange with him at his IUG time. As you all know was a very talented scientist, front line men and great person… he left an abyss for all of us.

— I am shocked hearing the tragic news about Mike. He was an outstanding, very excellent scientist and a very pleasant colleague. I enjoyed every moment of his company. Truly an unbelievable loss.

Please convey my best wishes and regards to his family.

— I learned today that Mike Revnivtsev prematurely died on 23 November after a long illness. We lost a bright astrophysicist and a very charming person with whom we had the privilege to discuss during several IUG meetings. I have memories of very pleasant chats with him, full of humanity, not only outstanding competence. I wish that Sasha could bring my condolences to his family.

— I just learnt the very sad news about Mike Revnivtsev, and I am still stunned and deeply saddened. Please convey my sincerest condolences to his family, and extend them to all his friends and colleagues.